There’s no doubt that the conceptual world, the world of social perspectives, is always in a state of change. For several decades there has been a movement away from traditional gender roles toward equality, and it has often been a movement of reactivity and anger, as most change is when it is seen to require force. The social world is made up of individual perspectives. The ancient wisdom as within, so without is an accurate pointer of how our individual world views combine to create what we call a culture or society, and of course it is the majority that decide more of the flavour of that culture than the minority do because more beliefs create more energy. Unfortunately, in our immaturity, we tend to take on the perspectives and views of others and adopt them as our own, rather than listening directly to our inner guidance and knowing, and a ‘mob mentality’ is created — an unconscious society.

So feminism as a movement should be about the equality of the feminine, right? Sadly when we move to the field of the masculine to fight for our rights, we become the very thing we didn’t like in the first place. We cover our essential feminine essence with layers of combative, stressful, and dominating ‘tough stuff’ in order to beat down the oppressors that have kept us locked into limited and constrictive roles, but in doing so we become more like the unenlightened energy that was limiting us out of it’s own fear.

Now, it’s a great thing to embody masculine qualities, as a feminine individual. It completes our personality and rounds us out as an individual, capable of adapting to any situation no matter what it calls forth within us. This is a wholly good thing, and also brings greater understanding of the masculine, so we can work and play with masculine individuals with understanding, in a healthy and mutually uplifting way. However, if we fall into the trap of identifying with our newfound masculine power, we lose our essential femininity, we neutralise the sexual dynamics of masculine and feminine relationship, and end up in a very civilised, but very sexually tepid environment with the one that is supposed to be sexually ravishing us with wild abandon, or worse, our roles are artificially reversed leading to stress, dissatisfaction, and feeling like we are exerting unnatural amounts of effort to keep things together.

In a dance, one must lead, and one must support and enhance and beautify that lead to its highest potential. This is the dance of masculine and feminine. If two dancers lead it will be a mess — ugly, disjointed. If two individuals support each others lead, but none lead, then nothing will happen — it will be directionless and confusing. However if one leads, the dance begins to happen, and as the other supports, beautifies, surrenders to the lead and flows her life force and attention into the dance, it becomes something more than either could be on their own, it becomes poetry in motion, full of surprises, dynamic movement, delights of the soul, deep fulfilment flourishes like an endlessly blooming flower full of the gifts of aliveness.

What happens in the individual, happens in the many. The mind of the many is created by the combined minds of all the individuals within that group. As we adopt masculine personas to shoehorn ourselves into masculine work positions and excel, even surpass those who assumed they were better at it by default, we must remember that what is not natural to us can never feel truly natural, and nor should it — life has a balance of masculine and feminine, and that balance is what creates the highest harmony in life. And in relationship, you cannot have attraction with only one pole. Returning to your natural essence is where you are satisfied and appreciated in relationship, and where you enhance the masculine energy of the other.

It is not a society where everyone is masculine that we need, it’s a society that values the feminine equally. It’s not for women to compete with men, it’s for women to be recognised for their true worth, and our differences to be celebrated and relished in. What if, instead of feminine souls having to be constantly masculine to compete for masculine jobs, the feminine jobs were valued and workers given fair wages for what they do? Jobs such as childcare and nursing require an abundance of feminine energy — nurturing, loving attentiveness, empathy, compassion, connection, support. They are jobs that masculine energy alone could never excel in, and they are jobs which take care of life itself, they shape the minds and hearts of our young, they keep safe and foster the independence of people who would be forgotten or left to die in a less evolved culture, they heal the sick and breathe life into lost souls. These jobs are incredibly valuable, yet often pay less than a shoe-shiner or bin man.

In order to find equality in the society, we must as individuals start to appreciate ourselves and each other more — appreciate our diverse gifts to one another and to the whole. Having a woman in office is not equality if that woman is more masculine than the men she is replacing. What is needed, what is a representation of equality, is to have an equal balance of masculine and feminine individuals in the places of making decisions, as in the ancient cultures where there would be a chief (masculine leader) and shaman (feminine leader), and those two energies would work together for the benefit of the tribe, courage and direction tempered by love and intuition. And it is the love and intuition, the feminine, that is missing from our councils and directors in this modern age. I would love to see the feminine in power, in office, whether it was flowing through a male or female body doesn’t really matter, it is the energy and heart that is missing, not the genitals. If we really want equality, it has to be true equality, not sameness. And equality comes from value.

Back to relationships at the individual level — if masculine and feminine become the same, there is no attraction, no life. If one is treated as less, there is attraction, but no freedom, no happiness. If it is seen and felt that each are different in a way that creates love, harmony, challenge, life, joy, passion, creativity, energy, and mutual adoration, then it can work in a way that enhances life for all, and we can rest in our truest essence, our inner ‘home’, whilst being loved and appreciated for who we are at our core. 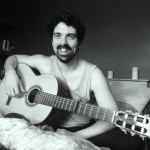 Ben Freeman is a devoted father, youth coach, and musician. His work focuses on giving a voice and inspiration to adults with learning difficulties, children, and teenagers across the UK. As an experienced world traveller and writer, Ben is wildly driven by his passion for love and creativity.

A richly satisfying sweet and spicy bolognese sauce with an easy alternative to pasta.