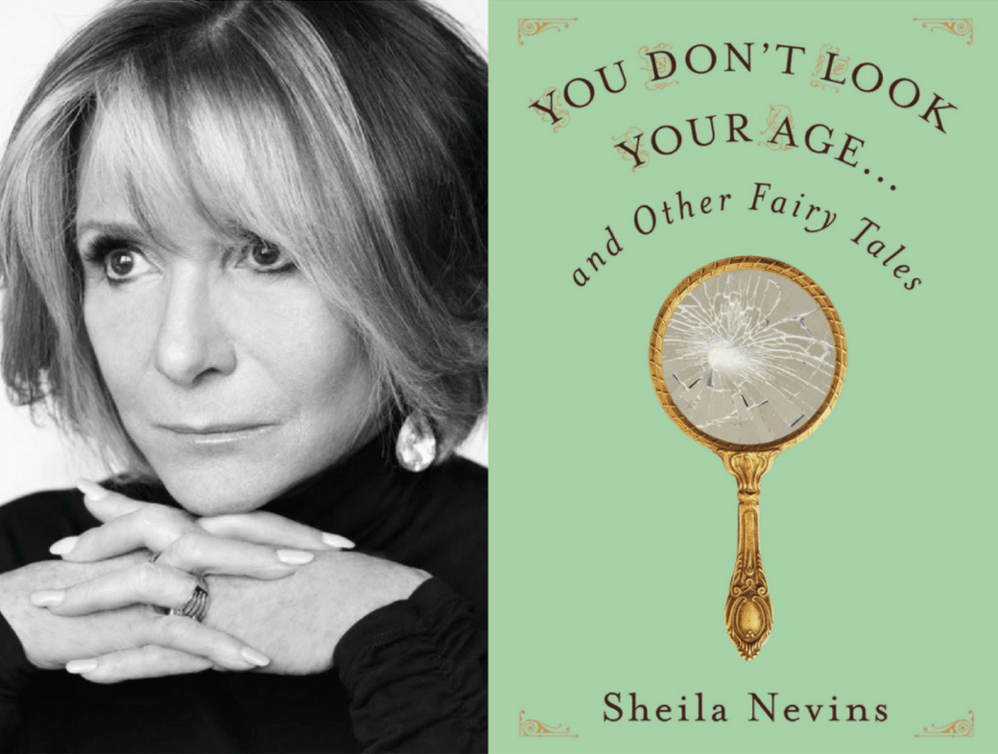 Sheila Nevins doesn’t look her age, 78. That’s why she can get away naming her deliciously sly memoir, “You Don’t Look Your Age… and Other Fairy Tales.”  This book of essays, poems and parables (Flatiron Books, 2017) covers everything from her son’s Tourette’s to a beloved dog’s death, menopause and mammograms, frenemies, faux pas and face-lifts—topics often dismissed as girl talk. But in Nevins’s voice, they are lessons in life for urban women like herself, trying to succeed in the male-dominated workplace, a subject Nevins tackles head-on with an advice list more candid than anything in “Women Who Work,” Ivanka Trump’s new “book of platitudes,” as one reviewer called it.

There are no platitudes in Nevins’s book. Its power comes from a trait her friends know well. Nevins can be—and in this tome is—unfiltered. There may be some pretending that the central character of this fairy tale or that one is not Nevins herself, just a friend with a made-up name, but if Nevins has censored herself it is not apparent. “I hear it’s really juicy,” said a friend of a friend.

“I’m taking the sock out of my mouth,” the author told me, speaking of the metaphorical gag that for years during her upward climb helped her laugh at bosses bad jokes, learn to flatter, and always look “as good as you can”—rules enumerated in this book—that helped her become President of HBO Documentary Films, a job she has held with distinction, earning more Emmys, Oscars, and Peabody Awards than any human on the planet. At a recent tribute to her three-decade career (and the beginning of her planned exit from HBO next March), Nevins dared the members of New York Women in Film and TV to “Ask me anything. Ask me if I ever slept with a boss to get ahead.”

Someone did ask. And Nevins admitted she did. The details are in the book’s chapter, “From Cosmo to Ms.” There were extenuating circumstances, she writes. “Don’t judge me unless you were there way back then and wanting a fair shot.”

As a journalist beginning a quest to add filmmaker to my job description, I wanted to meet Sheila Nevins. And I did in 2011 at a Manhattan conference sponsored by Yale in Hollywood (Nevins and I are both graduates of the Yale School of Drama: She, Class of ‘63. Me, Class of ‘48). Nevins was billed as the “Keynote Interview.” Her name on the program was a magnet. I hoped to glean some words of wisdom from her experience executive-producing some 1,000 documentaries.

When I arrived at the conference hotel on Lexington Avenue, the round tables were being set for lunch. Each one had a sign on it, denoting an entertainment-industry territory–ABC, NBC, CNN, HBO. I put a notebook on a chair at the HBO table as a placeholder and returned at lunchtime. The seats filled up fast, and arriving last was a glamorous looking woman with a shock of platinum hair lugging a flashy gold leatherette tote bag you won’t find in any Dress For Success manual. She didn’t have a chance to eat a morsel. With her chair more in the aisle than at the table, she was besieged by admirers and supplicants wanting to talk to her, shake her hand and remind her when they had met. Maybe they were wannabes like me. One of her HBO producers, Jacqueline Glover, took charge. “Why are you here?” she asked me first. I gave a passionate spiel about the film I wanted to make. When I finished everyone at the table applauded. I was stunned. “Did I just make a pitch?” I asked. Jackie and I exchanged cards. A few days later she called, saying, “Sheila wants to meet you. But don’t be disappointed. She does not want to talk about your film.” And from then on my film was out of bounds. If I wanted to talk about it, I talked to Jackie. A date was set for lunch at The Algonquin.

There, I met a plastic surgery-inquisitive. Sheila was as interested in my specialty as I was in hers—and so began our mutual-fascination friendship. After 25 years on the cosmetic surgery beat, I’m accustomed to women complaining to me about aging, but none have expressed it as poignantly—and dramatically—as Sheila, often in late-night emails.

“Just returned red-eyed from the red eye. Pretending to be 21. Did not work.” In a flurry of notes about whether or not she could attend my 85th birthday party, Sheila—who is eleven years my junior—wrote, “I am hardly ever-ever given the opportunity to be the youngest in the room. Yours in time passing.” And in discussing what gift to send me, despite the invitation advising No Gifts, she said she didn’t want me to feel left out “because aging is a kind of being left out.”

Since our initial meeting, I’ve seen Sheila sporadically. I’ve been invited to HBO documentary screenings and cocktails; watched some Hollywood films with her, even been a guest in her country home, where she taught me her rules of domestic life. Never do anything yourself you can pay others to do. Have the hair colorist and manicurist come to the house. Order in, even if it’s scrambled eggs and you have a frying pan. Shelia’s two domestic pleasures? Decorating and making coffee.

I read many of the essays in this book four years ago. She wrote them originally for the website www.wowowow.com, a blog founded by the magazine editor Joan Juliet Buck, actress Candice Bergen, book editor Joni Evans, and Sheila, to name a few. Sheila complained that no one was reading these gems and wanted my opinion. She doled them out to me, a la Scheherazade, one per night for a month.

If she has a public life after HBO, I can imagine her—like the late Spalding Gray—reading her pieces aloud onstage. For now, she has others reading all but one of them on an audio edition. And because she is Sheila Nevins, the readers are Meryl Streep, Glenn Close, Whoopi Goldberg, Christine Baranski, Tovah Feldshuh, Gloria Vanderbilt etc. etc.—you get the drift.

At the Pub Day luncheon hosted by the editor in chief of Marie Claire in the Hearst Tower, Rosie O’Donnell did a rousing rendition of the hilarious “I Hated Teddy and Teddy Hated Me,” about the time Sheila accidentally amputated the tail of her son’s hamster, Teddy. And Ellen Burstyn did a moving remembrance of a seminal event in Nevins’s life, a story Sheila calls “The Wrong Kind of Hot” that she has referred to many times—even at the earlier Yale in Hollywood event. It’s a story of her mixed emotions about her mother’s Raynaud’s disease, a case so severe it caused her mom to lose fingertips and a lower arm. The moment of truth was a mother-daughter stop at a Chock full o’Nuts lunch counter on a hot summer day when Sheila was a sophomore at Barnard. Sheila loosened the sleeve concealing her mother’s arm stump to help her cool off. A woman across the counter yelled out, “Please ladies, I’m eating. It’s rude to expose that arm. It makes me want to throw up.”

Mother and daughter fled the scene and Sheila has never forgiven herself for not standing up for her mother. She has made up for it by using the event as a motivating force in her work. It inspired her interest, she wrote, “in those who need visibility, notoriety, and acceptance—anonymous victims of unfairness, deprivation and poverty… Documentaries talked back while I had been unable.”

Sheila can now add author to her impressive resume. Her book ranks high on Amazon and made the Times best-seller list.

Meanwhile, I am almost 90—and am finally a director, though my film is on a different subject than the one I pitched that day in 2011 to Jackie Glover. Two years ago, calling my project “The Elephant in the Room,” Sheila offered a session of constructive criticism and advice. I took some of it.

Fast forward. The film is finished and, so far, selected by seven film festivals and counting. Distributors have come calling. I sent a copy of it to HBO several months ago. I have no idea if Sheila watched it. But it doesn’t matter. Thanks to her, I made it. Wanting to impress her was a tremendous incentive not to quit. And if I was seeking approval, I got it at my first festival in Miami when I won the Audience Award. It came with a beautiful trophy and a sizable check.

The best thing about books such as “You Don’t Look Your Age…” is that you can find life lessons that are cheaper than a shrink. In her essay, “Mentor Not,” Sheila answers the hypothetical question—“Do you have a mentor?” She describes her youthful love affair with a law student of a different faith. She tells of the weekend he took her home to Mother in some Wasp enclave and while they were doing the dishes, Mother asked, “Sheila, dear… aren’t you Jewish?”
“Yes,” said Sheila.
“So… aren’t there any interesting Jewish men at Yale who would be more suitable for you?”

That was the last weekend Sheila saw the young man she calls the love of her life. Since then, she writes, revenge has been her mentor.
“This mother who deemed me unworthy
Has been by my side through
Accolades for accomplishments,
Praise for good deeds,
Every trophy was for her…
Thanks for the mentoring.”

Click here for an exclusive excerpt from Sheila Nevins’s book, “You Don’t Look Your Age… and Other Fairy Tales.”

“You Don’t Look Your Age… And Other Fairy Tales” is available on Amazon.

Joan Kron is the former contributing editor at large of Allure magazine. Her first film, a feature documentary, called Take My Nose…Please! about women, comedy and plastic surgery, is currently playing at film festivals. The official trailer and festival dates can be seen at www.takemynoseplease.com.

Find yourself open to new possibilities and personal awareness this month with the November horoscopes from astrologer Rachel Lang of Blissen Up. Be sure to visit Blissen…